How Many Natural Lakes are in Virginia Anyway?

Here at Solutions, we often get asked this question – especially by clients who have already seen, or read about in one of our recent blogs, our local lakes at Chris Greene, Mint Springs, Sherando, Smith Mountain and Lake Anna, just to name a few. 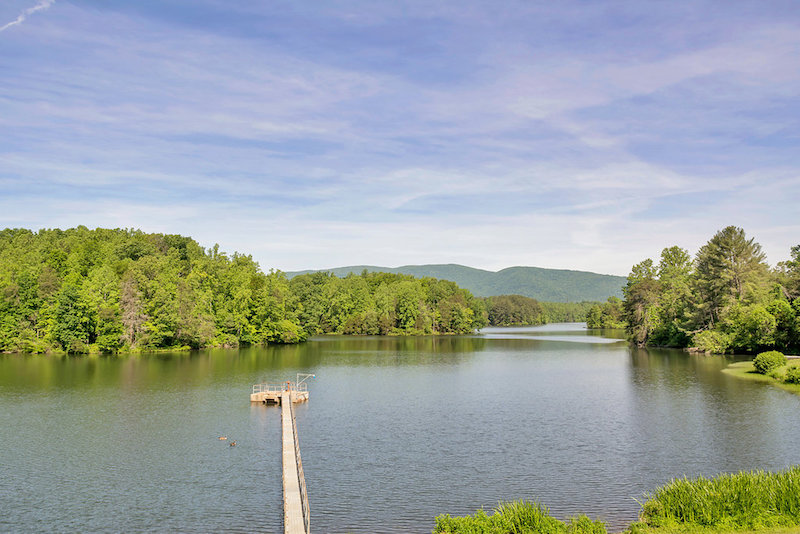 You might be surprised to hear that none of the ones mentioned above are naturally formed. All but two lakes in our state – Mountain Lake and Lake Drummond – are man-made.

It’s not clear why either lake formed or has persisted until today, when all other lakes in Virginia have been drained by erosion. Mountain Lake in Giles County, has even been known to disappear at times.

This 50-acre freshwater lake might be more familiar as one of the scenic backdrops in the 1987 movie “Dirty Dancing” – it’s located near Newport.

Along with Lake Drummond in the Great Dismal Swamp, it’s one of only two natural lakes in Virginia. The first known written evidence of the lake was by Christopher Gist of the Ohio Land Surveying Company, in 1751. It was originally known as Salt Pond, as it was where cattle were given salt.

According to information from virginiaplaces.org, Mountain Lake is located at nearly 4,000 feet in elevation and is over half a mile long (when full).

Over 10,000 years ago, the stream known today as Pond Drain was at the headwaters of the Eastern Continental Divide, flowing uninterrupted towards the New River and the Gulf of Mexico. On the other side of Salt Pond Mountain, Johns Creek flowed northeast towards the James River and the Atlantic Ocean.

The rock layers near Mountain Lake on Salt Pond Mountain include a thin crust of Rose Hill sandstone at the top, 50-100′ of Tuscarora (Clinch) sandstone below it, then a layer of Juniata sandstone/mudstone about 200′ thick, with over 1500′ of Reedsville-Trenton (Martinsburg) shale at the bottom. Salt Pond Mountain itself is not limestone, but there is karst topography at lower elevations in older limestone bedrock.

The bottom of Mountain Lake is Juniata sandstone/mudstone. A contact between a purple shale layer and a white/orange sandstone layer is located below the edge of the perennial vegetation surrounding the lake. The shale crumbles easily when squeezed by hand, while the sandstone is substantially harder to crack.

Within the Juniata, four “piping holes” drain water underground at the northern end. These were clearly exposed when the lake drained completely in 2008. A fifth “leak” was discovered in 2014, about 45 feet above the bottom of the lake.

According to virginiaplaces.org, the creation of Lake Drummond is even more curious. Geologically, it’s an unusually large (3,108 acre) open body of water on the Coastal Plain, east of the Suffolk Scarp. The scarp marks the location of the Atlantic Ocean shoreline and barrier islands roughly 125,000 years ago, when the sea level and temperatures were higher, and the ice melted off the southern half of Greenland.

The scarp is used today to separate the Outer Coastal Plain (including Lake Drummond) vs. the Middle Coastal Plain west of the scarp.To the east, the Norfolk Formation was deposited on top of the clay-rich Yorktown Formation, and the sandy sediments provide the groundwater recharge area for the Great Dismal Swamp National Wildlife Refuge.

Lake Drummond is a freshwater lake at the center of the Great Dismal Swamp, a marshy region on the Coastal Plain of southeastern Virginia and northeastern North Carolina between Norfolk, Virginia, and Elizabeth City, North Carolina. Management of the lake is the responsibility of the United States Fish and Wildlife Service.

Scientists think the Great Dismal Swamp was created when the continental shelf made its last big shift. The whole swamp has peat underneath. At normal water levels, the lake is 6-7 feet deep and the surface is 18 feet above sea level.

In 1665, William Drummond, a future governor of North Carolina, first visited the lake that now bears his name.